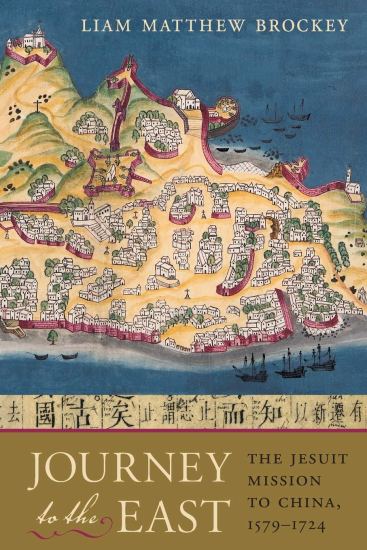 The first Jesuit missionaries to China were a really fascinating group and Liam Matthew Brockey’s Journey to the East provides many new insights into their mission. Whereas previous accounts tended to emphasise the Jesuit mission to the imperial court, Brockey conclusively shows that they also made a big impact in the countryside among ordinary folk too.

In his book, Singing of the Source, Jonathan Chaves concentrates on just one of the Jesuit’s converts, the remarkable artist and poet, Wu Li. Here is what I wrote about him in 50 Books for Life: a concise guide to Catholic Literature:

One of the glories of the Catholic Church is that it is catholic or, to put it another way, universal. And the universality of the Church goes back a lot farther than most people realize. There were, for example, Catholics in China as early as the seventh century, though Christianity only really took off in the sixteenth century with the arrival of Matteo Ricci and other Jesuit missionaries. The Jesuits were strikingly successful in China, though they never managed to convert any of the emperors as they had hoped. Nevertheless, as recent historical research has shown, they did make a great impact in the countryside, away from the imperial court, gaining many converts from among both the educated elite and ordinary citizens. One of these converts was a famous artist and poet called Wu Li.

Wu Li was one of the six Orthodox Masters of early Qing Dynasty painting in China. After converting to Christianity, he entered the Society of Jesus in 1682 and was ordained as a priest in 1688. However, even after he became a priest, Wu Li did not stop painting or writing poetry. Quite the opposite. Recent scholars have argued that he was the father of Chinese Christian poetry and that his Christian faith enabled him to reshape early Qing art. His paintings can now be seen in galleries across the world, ranging from the Metropolitan Museum of Art in New York to the Shanghai Museum. His poetry is less well known, but it too is worth tracking down. The most ambitious and successful of his works is “Singing of the Source and Course of Holy Church,” a series of twelve 8-line poems, which attempts to distill the essentials of Christianity into the shi style of traditional Chinese verse.

Wu Li begins and ends his sequence of poems in Heaven, the place where we should “seek true blessings and true joy,” with a description of a palace, enclosed within twelve walls, in which our Holy Mother is surrounded by the saints. This is the source of Holy Church that the title speaks of. The other ten poems, each written in strict shi style, describe the course of Holy Church. Moving from the divine plan prepared before the foundation of the world to the creation and the incarnation, Wu Li then describes his own conversion. After establishing that “the achievements and fame of this ephemeral world are like the footprints of geese on snow,” Wu Li moves onto poems that focus on the Holy Trinity and the Eucharist before returning to the goal of every Christian: Heaven itself.

The highly compressed and allusive nature of classical Chinese poetry is a real problem for translators. However, even in English translation, we are able to get a sense of Wu Li’s incredible achievement. As a poet, he established a new direction for his countrymen to follow. As an artist, he is still revered as a master. Some of his paintings and poems have been lost, and we know very little about his priestly ministry, but, given the richness of what does survive, we can be extremely grateful for these unexpected gems of Catholic art and literature.