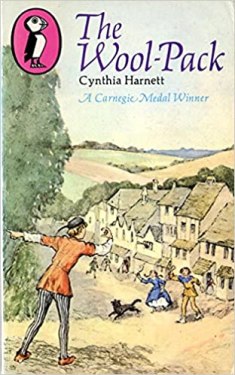 Cynthia Harnett’s The Wool-Pack is a fascinating book in all sorts of ways. I wonder, for a start, how a contemporary publisher would react to any author who presented a book to them on the 15th century wool trade? But The Wool-Pack is by no means a dry, historical tome. The winner of the 1951 Carnegie Medal (the year before Mary Norton won the award for The Borrowers), it attracted critical acclaim and delighted a whole generation of children. It may not be a fashionable book today but it more than survives the passage of time.

There are two main plot-lines in the book: one of which concerns the engagement of the young Nicholas Fetterlock to the even younger Cecily Bradshaw, while the other concerns two shady Lombard bankers who seem to be up to no good. The plot is relatively straightforward but gripping nevertheless and both Nicholas and Cecily are engaging characters. In fact, Cecily would not be out of place in any children’s novel written in the 21st century: she is smart, independent and outwits most adults she meets.

However, this is very much not a 21st century book. It is a novel that is highly attentive to the historical period in which it is set. The research and Cynthia Harnett’s own illustrations are immaculate. More significantly, the book takes the pastness of the past seriously. There is no hidden presentist agenda that looks back at the so-called Middle Ages with disdain.

What this means in practice is that Cynthia Harnett took both the 15th century economy and its religion seriously. The book’s characters pray (and have their prayers answered), they go to Mass, and there is even a wonderful description of a Corpus Christi procession. Would we see the like in a children’s novel published today, I wonder?

I don’t want to give the wrong impression though. The story’s focaliser is the young Nicholas Fetterlock, which means that this is a book that is very much written for children. Cynthia Harnett does not whack her readers over the head with her research or an overt message. The Wool-Pack is a wonderful book that can be read with simple pleasure. That is why it gained so many accolades over the years and that is why I highly recommend it for 8-12 year olds today.