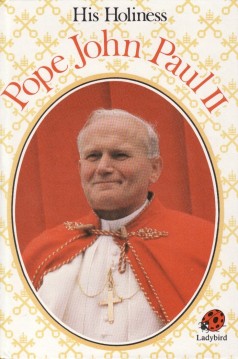 Looking through a shelf of old Ladybird books the other day, I was surprised to find this book on Pope John Paul II by Joan Collins. (Presumably not that Joan Collins.) It was published in 1982, shortly after the pope’s visit to Britain and is remarkably positive about him.

The book addresses John Paul’s election, his life in Poland, his travels, and the assassination attempt in 1981. The only disappointing page is the one on the Second Vatican Council, which is rather garbled and inaccurate. Nonetheless, this is a short book that we can be largely happy with.

Let’s hope Ladybird’s next publishing project is a book on Pope Benedict XVI!