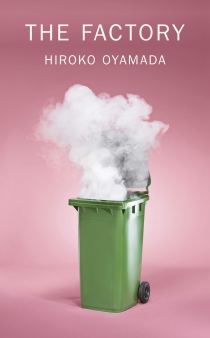 I have just finished reading The Factory by Hiroko Oyamada and really enjoyed it. The Factory is a novel about work and, specifically, about the nature of modern work.

It is a short novel – a mere 116 pages – but the reader still has his or her work cut out. The narrative shifts alone keep us on our toes. This is in stark contrast to the work that is done within the novel, which is largely pointless and untaxing. In fact, the main characteristic of the factory itself is that nothing, apparently, is made there.

The novel follows three workers, each of whom has a dead end job in the enormous factory. One shreds paper all day long, another proofreads meaningless documents, while the third has been given the impossible task of green-roofing the whole factory on his own. All three are alienated but none of them is fundamentally disturbed by the tasks they have been given. Though there are Kafkaesque elements to The Factory, the tone feels very different from what we might expect in one of Kafka’s stories. Oyamada’s workers drift relatively happily through their work and are more baffled than oppressed by the system in which they are evidently trapped.

Nonetheless, the three first-person narrators are dehumanised – quite literally, as we eventually discover – by the work they do. Their voices are so similar that it comes as something of a surprise to discover, halfway through the second chapter and again in the third, that a new character is speaking. They are bored. They are listless. And they are adrift.

However, the protagonists’ main problem is that their work lacks purpose. It is this absence of telos that drives the novel’s inactive action and that makes it such a fascinating book. What Oyamada – who wrote the novel after temping in carmaker’s subsidiary – captures so well is the purposelessness of modern existence for so many people, in their work and, because of their work, in the rest of their lives as well.

This purposeless drift is written into the structure of the narrative itself, which plays around with many of the distinctions that usually anchor us: time and place; work and relaxation; reality and fantasy. The characters may lack purpose but the very act of reading means that our purpose is retained. That is how, despite its indictment of modern work, The Factory offers us – through the work we do as readers – at least a glimpse of another, better way.